Sydney Executive Business Association Inc. (SEBA) was established in 2009 as part of Lions Clubs International. We have now evolved into a fully autonomous and independent non-profit organisation in our own right.

SEBA was initially set up as the Sydney Executive Business Lions in 2009 as part of Lions Club International.

In 2015 our members voted to disengage with the Lions, and become a fully autonomous and independent non-religious, non-political and non-profit organisation in our own right.

SEBA is an organization for otherwise busy people to have the opportunity to give back and support the less fortunate in our community.

Our members are mostly middle to senior management and business owners. We host the occasional meetups over a lunch or dinner, where we invite speakers from various industries to share their views on a wide range of topics of interest. Past speakers include the Chairman of Rothschild, The MD of GE Finance, the Chief Economists from both ANZ and the Commonwealth Bank, Kathryn Greiner AO and Mark Latham.

At the end of the year, our members, families, friends and sponsors are invited to come together to celebrate over a sumptuous Christmas dinner.

SEBA organises one major fundraising event each year to support a nominated charity. Since its inception, we have raised and distributed over half a million dollars to the following organizations:
1) Sydney University Nerve Research Foundation
2) Westmead Children’s Hospital
3) Cystic Fibrosis
4) Guide Dogs NSW
5) Lou’s Place – a day refuge for victims of domestic violence
6) Bus of Books – literacy program for children in Aboriginal communities
7) Couples for Christ – to help rebuild an orphanage in Tacloban, Philippines which was destroyed by Typhoon Hainan in 2013
8) Arrow Bone Marrow Foundation
9) Farmers’ Appeal – through The Australian Chinese Charity Foundation

BE PART OF THIS 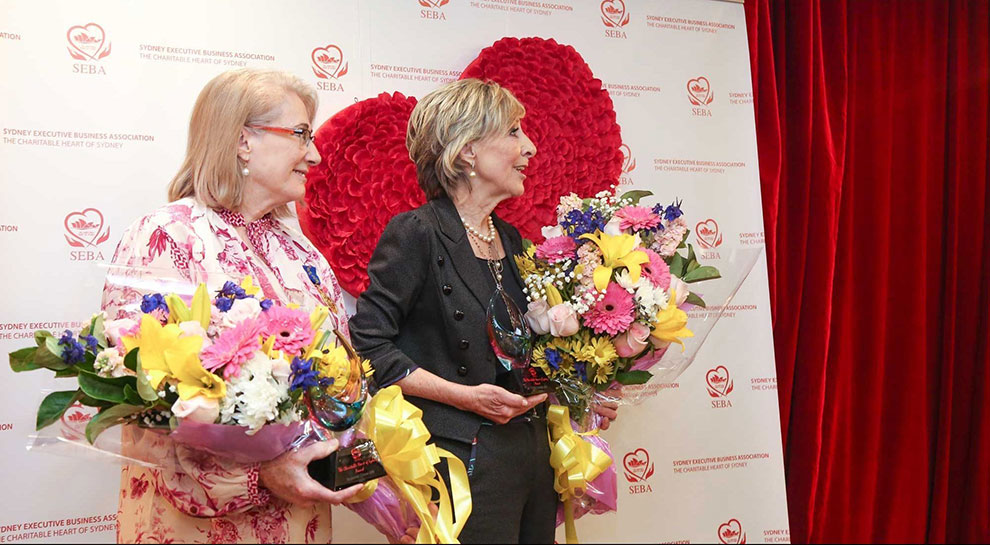 Each year, this Award is presented to one or two nominated philanthropist, or anyone who has contributed their valuable time and/or money, and in so doing, has made a significant impact and benefit to the community at large.